This is not a post about Chris but a post about how we consider what we hold onto and what we leave of him, the unique versions of him that each of us knew. It is a post not about his memory but one, I hope, for the good of us who knew him.

One of the last things Chris said to me was that he believed I was threatening his legacy. Speaking out was too big of a threat, no matter what good might come of it. He said he knew it sounded bad to admit it, but that his legacy, the story of his work, was more important to him than anything else. Explicitly, more than me, more than complaints anyone else had, more than anything else that had happened "outside of" his work. Which is a tricky phrase in itself.

We all tell or share or disrupt stories. Most of us for a living. Or we love people who do. And it falls to all of us to decide what we keep, what we lock away for a while, what we absolutely and completely burn of Chris. We each have this terrible mess of shards of not so much a story now, but a human being we knew. And we eventually have to put them together into something new.

And it all takes time, grief. I imagine. Well, I've been told by people much wiser than myself. And it certainly seems true so far.

The work Chris made may have done some people a lot of good. And the spaces that made it might have done, too. But he refused to protect any process, any show, any person, from the harm he knew he could inflict. I know that, many others know it, and he said as much directly in a few things he wrote shortly before he died.

Legally, I've been made much more of a keeper of Chris's belongings and documents and work than anyone. And I don't think that's unfair. I was also a keeper of his health, his wellbeing, the home we shared, many of his secrets (which I only found to be secrets after his death), and ultimately, what happened to him after he insisted on continuing with over two decades of participating in horrendous child abuse.

So, within a few days of the news of his death, someone from the Board of Directors of his (defunct-as-of-mid-May) company, reached out to me. They explained that they had been in touch with some people from the Arts Council England and some very high-level professional archivists. They mentioned (and I well knew) that there were a number of documents in Chris's possession - lots of early work that never went to publication. And very early stuff - sixth forum and university essays, a novel, poems, written in his childhood and teenage years. And because he was a publicly-funded artist for so long, there was a national interest in his work. They explained that in five years, ten years, people wouldn't be thinking about what he'd done. He was part of the national history, the national culture of theatre, and scholars and artists and students should have the right to see how he built up his career to the manuscripts still available in print.

There is a really thin, definitely not static or straight line between doing anything to allow a sense of legacy to continue, and still preserving evidence of what he did and how he did it, to allow for a fully-informed industry/national discussion now, or in five months, or in ten years.

My guiding thought on all of this has been that the evidence of his crimes and abuse lives with the police, lives with the people who survived and experienced it. And I know so much of it also died with child victims of his. And the little of that which remains will be reviewed by police, documented, and destroyed. Everything beyond that - the separate, dangerously incomplete and disingenuous world he wanted to create in his work - cannot and should not sit anywhere without full context.

And we don't get to have the full context. I'm sure I still know more of that context than anyone else. That's not a brag - it's an immense and terrible weight I must live with until I die. There is no way to put a warning preface or a plaque or a link to an essay on anything he did professionally. Because everything he did was so completely and totally in service to running away and having small moments of peace amongst the harm he was doing.

So. There will be no archive. I burned all of Chris's papers. Everything. I destroyed his photo collection. Everything digital will be completely destroyed by police as soon as they are finished the investigation, as protocol. I am in the process of clearing out his entire online backups and all the content he left online.

I wrote the board member who had been in touch with me when I had done this to inform them. I simply said, "There will be no archive."

I'm aware there are some artists who interviewed him on YouTube or elsewhere or recorded episodes of their own podcast episodes with him, etc. I would ask those artists to delete and destroy those files as well. But, as I said earlier, this is a task that lies with all of us. And everyone should have the space to make their own decisions.

The evidence will remain. And the rest of it is much more terrorism from beyond the grave than evidence, I think.

I know some people I've spoken to (and who were quite friendly to me) will disagree with what I've done. And it may make their grief more difficult. We are, I think, in a sort of nuclear-war level of harm reduction mode.

In the end, I hope this is a call that makes the world a better and more liveable place. Or even a slightly more just place. For anyone who knew Chris or even only his work.

And in the end, if it's not, then I'm sorry, but that's too bad. I won't be justifying this decision to anyone, and I don't need to. I don't owe ACE or the "Nation" or anyone else anything. I was his husband. There was enough private, and private-into-public, terror. And then all the public and personal - public terror that the bits of him left around in publishers and emails to friends, and all of that - that can all sort itself out without me if it needs to. Frankly, the lightest of what he left me with was his archive. And that is gone now.

Because it falls in the same vein, a short note on his memorial. Chris requested a direct cremation, which will happen. This means there will be no service with his body or remains. A memorial will eventually occur. After consulting with those he mentioned in his final wishes, we have unanimously decided that no service will occur and the ceremony (or, I would call it much more of a carefully-dramaturg-ed show) he described will not take place.

There will be a gathering for those who knew Chris personally to meet, talk, process, and have some food and drink. I am working on the details of what and when that will be. I've agreed with those helping me that this will take time to properly arrange and time for people to privately work through what has happened to some degree before we invite people to come together. Anyone who knew Chris will have plenty of warning before the event, if they want to add it to their diary or if they need to travel to London.

A few people after my "There Will Be No Finale" post noted that there was no comfort in it. I don't imagine there is any here, either. But for anyone who takes a bit of solace in something more direct than the semi-essay I've written here: 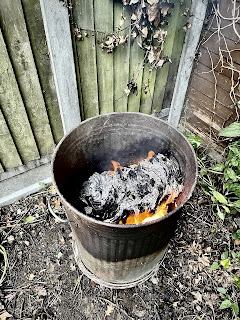 You were dead by the time that I had found you.

You lived large until the day they finally caught you.

And I wanna build a tower to all the nicer things you could have been.

Posted by Griffyn Gilligan at 14:53